An SSD (Solid-State Drive) is a data storage medium that is increasingly used by both individuals and businesses. Find out everything you need to know about it: definition, advantages, different types…

Since the late 2000s, the SSDs are gradually replacing hard disks in desktops, data center servers and workstations. It is a powerful, fast, reliable and efficient data storage medium.

In concrete terms, an SSD consists of a assembly of memory chips on a printed circuit board. An In/Out interface (usually SATA or PCIe) is used to power this assembly and ensure data transfer.

SSD or HDD: what are the differences? 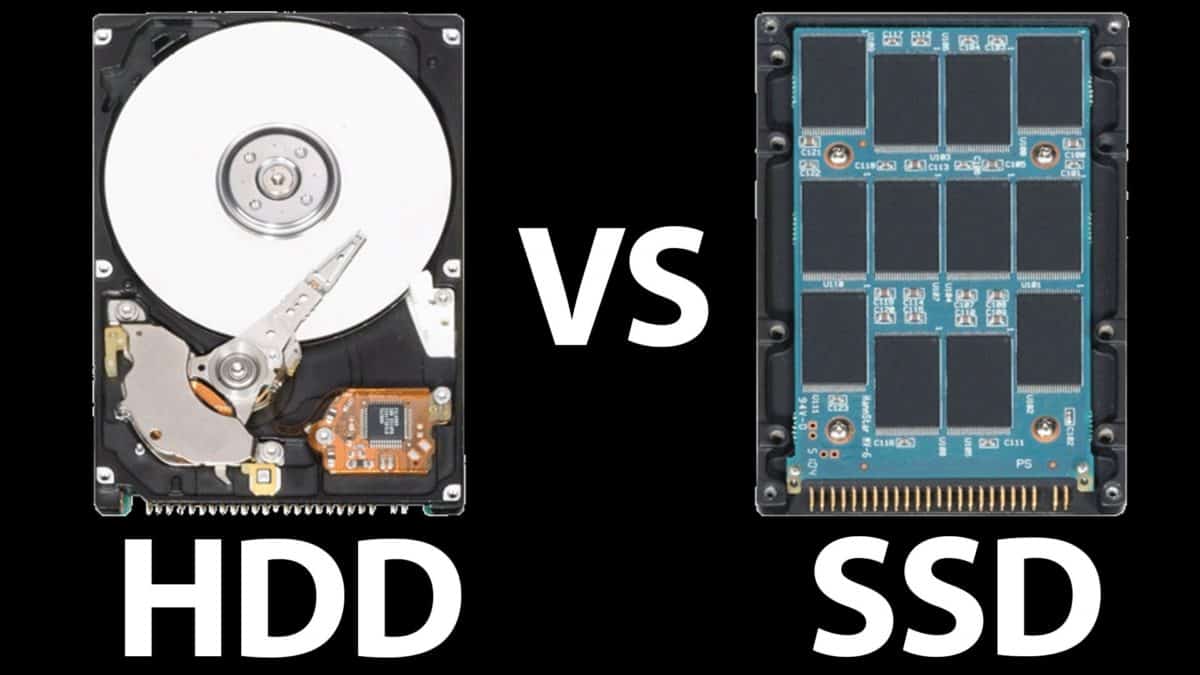 To fully understand what an SSD is, it is useful to compare it with HDDs (Hard Disk Drive). Once the most common storage medium, the hard disk offers “non-volatile” storage based on physical forces: motion and magnetism.

In concrete terms, this means disks that spin and write code…housed in a magnetic mantle to preserve data. Reliable and easy to use, HDDs have long remained popular because there was no better alternative.

However, the arrival of the SSD changed all that. This technology is based on flash memory. Thus, instead of physically writing data to disk, these devices use memory chips (such as NAND chips). Within these chips, semiconductors arrange themselves into different states of electrical charge in order to store the code. Only the electrical patterns move, which is why they are called “solid state”.

It should be noted that Flash memory was already found in other devices such as thumbdrives. However, this technology was not fast enough and too expensive to democratize…. Moreover, even modern SSDs are still more expensive than an HDD with the same capacity.

SSD: what are the advantages? 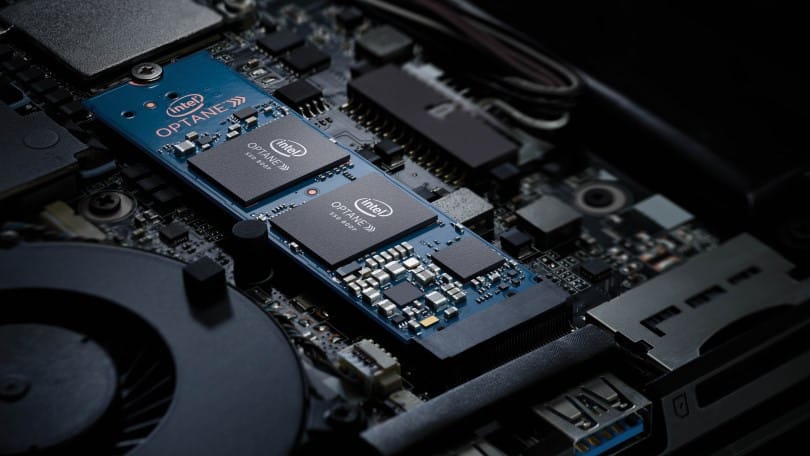 The SSD has many advantages over the HDD. First of all, it has no moving parts. This is an important asset, as these parts can be easily damaged. For example, when a laptop falls, the HDD may break. This is not the case with the SDD. Therefore, they are generally more durable and reliable than HDDs.

Also, because of the speed at which the electrical patterns move, SSDs can write or read data at an much higher speed to that of the HDDs. Energy consumption is also much lower, which also limits heating and preserves autonomy (in the case of laptops).

They are also smaller and lighter than the HDDs. This has led to the creation of much thinner laptops, tablets and other mobile devices. The thinnest devices embed an SSD directly on the motherboard. They also come in different shapes and sizes, depending on the number of chips they carry and the arrangement of these components.

Another advantage: the dysfunctions are much rarer for SSDs than for HDDs. This is particularly related to features such as ECC (Error-Correction-Code Correction) which helps to avoid errors.

However, both devices are sensitive to heat. When they exceed 50 degrees Celsius, the possibility of reading and writing errors increases. A data centre manager must therefore ensure that the racks are adequately ventilated. Moreover, temperature variations of around 5 degrees would drastically reduce the service life of the equipment. In this sense, manufacturers are increasingly offering dedicated fans. These fans are in response to the demand from NVMe SSD users, whose heating capacities are impressive. Some models reach more than 100 degrees Celsius.

What are the different types of memory?

There are three different types of memory for SSDs: SLC, MLC and TLC. In the case of the Single-level cell (SLC)If you want to store a piece of data (1 or 0), each cell can store a piece of data (1 or 0). Thus, each cell can only read two different values. This allows the SLC memory to be the fastest and most accurate for writing, to consume the least energy, and to be the most durable. Unfortunately, it is also the most expensive. This is why this type of memory is mainly used by businesses.

Memory Multi-level Cell (MLC) allows each cell to keep two pieces of data (1 and 0). So there are four different possible values: 00, 11, 01, and 1. In fact, the MLC allows the storage capacity to be expanded without increasing the size of the SSD. The price is also cheaper than that of the SLC. On the other hand, the writing speed is slower and less accurate, and the power consumption is much higher. MLC SSDs are currently most common on high-end devices.

Finally, the memory Triple-level cell (TLC) allows each cell to hold three pieces of data. Thus, their storage capacity is higher for a much cheaper price. On the other hand, the writing and reading speed is slower and less accurate and the power consumption is even higher than for MLC SSDs.

SSD: what are the different types of connections? 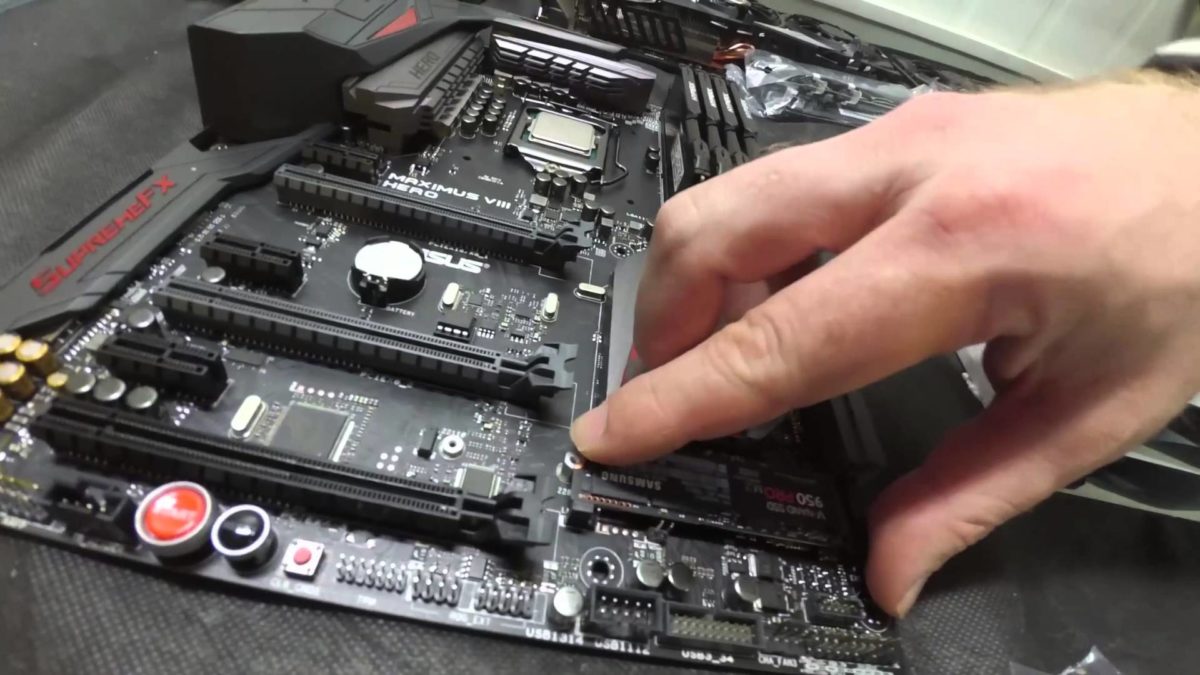 There are different types of connections for SSDs. In general, there are three main categories.

SATA III is the final evolution of the SATA connection, which can be found on both HDDs and SSDs. This versatility proved very useful in the transition from HDD to Solid State Drive. However, now that it is gradually becoming the most widely used storage medium, the SATA III becomes less popular. For good reason, they can only support an average bandwidth of 600 megabytes per second. However, the media in question must be connected to a 6GB/s Sata III port.

PCIe (Peripheral Component Interconnect Express) allows to connect the SSD directly to the PCIe lines motherboards. This makes the data flow more direct. This speeds up operations. The maximum writing speed can be up to 1Gb per second. Unfortunately, this connection is currently a bit expensive. It is therefore reserved for users who are looking for maximum performance.

The NVMe (Non-Volatile Memor Express) is designed to make PCIe connections more versatile, easier to upgrade, and faster. It is the latest connectionand therefore the most expensive at the moment. As an example in 2019, a 500GB NVMe SSD connected in M2 costs the same price as a 250GB SATA III model in 2017: around 80 euros on materiel.net. Due to its performance, however, the NVMe is expected to become more widely available in the coming years.

What future for SSD?

Over time, HDDs will become increasingly rare.. They will certainly always be used to store very large amounts of data, but SSDs are expected to become the new standard. SSDs are now common even on the most economical configurations. However, it is only one solution among others in a Big Data and Cloud storage context.

While they can speed up data access and migration, these clusters of Flash memory chips have a limited lifespan depending on their use. They are not recommended for long-term storage.

One remembers the tweets of Octave Klaba, CEO of OVH, evoking 96 Solid State Drive fallen after a power failure. Now, conventional hard drives work properly for about 10 years. However, performance drops significantly after five years of use, according to a Google report. This study carried out in the data centres of the firm of Mountain View, which involved 100,000 hard disks, shows that components that are heavily used in the first six months tend to fail more easily.

In addition to a technological aspect, the future of the SSD lies in market consolidation. On August 31, 2019, Toshiba announced the acquisition of Lite-On’s Solid State Drive business for $165 million. This transaction will be completed in the first half of 2020. As a result, the Japanese company intends to strengthen its business in this area. It wants to meet the “growing demand” from the consumer and IT markets.

The lifetime of a Solid State Drive really depends on the number of writings and readings, the electrical charges received, but the most solicited (in a cloud, big data and analytics context) last about 3 years. Many products on the market contradict this average. Some of them are guaranteed for 10 years, indicating that they could work for several decades in office use. It will take a few more years before a clear picture of this variable can be drawn.

In turn, the SSD will probably end up being replaced. However, no truly viable technology is capable of fulfilling this role to date. It is likely to be necessary to wait until quantum storage technology develops to witness the end of the reign of Solid-State Storage.

Solid State Drives for the Cloud and Big Data

This data centre solution is geared towards real-time operations. The Micron 9300 series consists of five drives ranging in size from 3.2 TB to 15.36 TB. The read speed is up to 3.5 Gb/sec, a far cry from the performance of consumer disks (approximately 2 GB/sec). They can perform up to 850,000 input/output operations per second reading and 310,000 writing operations in the same time. They can be divided into 32 separate slots for easy deployment. These SSDs are in the form of a conventional 2.5-inch HDD.

The Californian manufacturer has been developing its Intel Optane technology for several years. This technology is found in the RAM strips and SSDs dedicated to data centers. With Optane, Intel promises to reduce bottlenecks while significantly increasing storage space and data access speed. To deliver on this promise, the company is offering the DC P4800X series SSDs. These all feature NVME 3.0 PCIe connectivity.

On the other hand, the storage volume remains lower than that of competitors: 375 GB to 1.5 TB. The most expensive model, 8000 euros, reaches 2.5 GB/sec in sequential reading and 2.2 GB/sec in writing. The maximum number of operations per second in write and read is 550,000. Clearly, this series is intended for analytical work that requires ingesting large volumes of data in real time.

O’Reilly, a company specialized in learning and analyzing new technologies, wanted to know how SSDs perform in a Big Data context. In a study conducted in 2015, it determined that these devices offered 70% extra performance when used within a MapReduce infrastructure. The price of the hardware, on the other hand, was 2.5 times higher than an HDD setup.

However, new standards such as NVMe may not be compatible with the machines and hypervisors installed in data centers. In addition, network capabilities are not suited to the “toughest” racks. The result is a performance limitation that potentially handicaps a company’s analytical capabilities. It is therefore necessary to anticipate all the technical aspects before opting to take full advantage of this technology.