This article was written by Oxana Gouliaéva, expert in marketing strategy for Tech and IT.

In September 2021 Christie’s had a historic moment. It announced that its NFT sales had surpassed $100 million worldwide and this was less than a year after its very first sale in October 2020. But is there an artistic novelty behind the sultriness of the juicy crypto-art market? Yes, and you’ll be very surprised.

ArtReview magazine has just published Power100, its annual rating of the 100 most influential people in the contemporary art world. In 2021, the number one on the list is a non-human entity: the NFT, a non-exchangeable token.

Surprise or not ? The NFT has turned the art market upside down and shown that digital art can also be very expensive. In March 2021, NFT made headlines around the world when the monumental NFT work “Everydays: The First 5000 Days” by Mike Winkelmann, aka Beeple, sold at auction at Christie’s for $69.3 million, becoming the third most expensive work by a living artist. In November 2021, for $28.9 million the same Beeple sold his work “Man Alone,” billed as a “kinetic video sculpture.” It is composed of four 16K definition screens assembled like a box in which we see a 3D astronaut walking against a background of changing landscapes. The particularity of the work is its evolutivity. Even when sold, the digital sculpture remains forever under the control of its creator who can add and modify elements to surprise the owner, allow people to return regularly to the work and find new meanings for it. 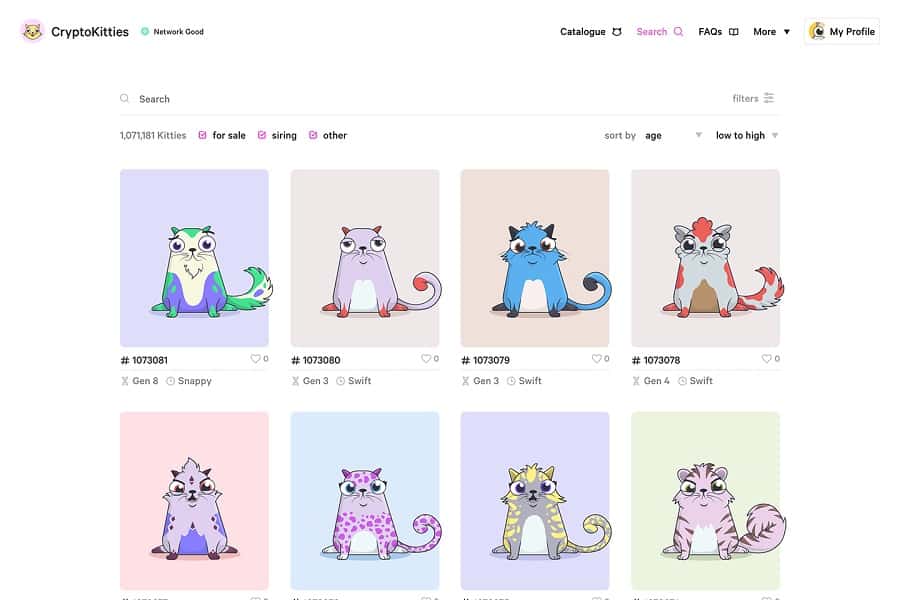 On the rarity of punks, cats worth millions and new properties of digital art

Yet digital art started with punks and cats. Specifically, with the “CryptoPunks” and “CryptoKitties” projects that emerged in 2017. In the beginning there was Larva Labs, two guys from Brooklyn who generated 10,000 pictures of punks and tokenized them on the Ethereum blockchain, then put them up for public sale. At first demand was low, but when a New York Times article proclaimed that this might be the future of art, all the punks sold out within minutes. When people started selling them again, it became apparent that some Punks were rarer than others. For example, there were only eight Alien Punks and their price went up very quickly, reaching $40,000 (today, millions).

Then there were “CryptoKitties”, a similar project, but one that allowed these cryptochats to be crossed, that is, to take a male cat and a female cat to “create” new kittens. There were many unique combinations and the most expensive kittens reached hundreds of thousands of dollars. In total, over several months, $20 million worth of kittens were sold.

How to explain it ? Before blockchain and NFTs, any digital artwork could be copied, and as such, its value was unclear. It is thanks to blockchain that for the first time digital art, in fact, a file, has become truly unique. Now, by having two identical digital files in front of you, you can distinguish the copy from the original. In other words, digital art now has the characteristics of physical art, which changes many things. In addition, digital wallets have appeared that allow you to store funds in crypto-currencies, but also digital artworks.

Alcazar in NFT or new communities

Another change that NFTs bring to art is the collective ownership of art objects, very much in the air of the times with community building and the sharing economy. Let’s take the example of “89 seconds at the Alcazar”, the video work by New York artist Eve Sussman. Inspired by Diego Velazquez’s “Meninas”, it evokes Alcazar, the former residence of the Spanish royal family. Its first version – lasting 9 minutes and 44 seconds – was created in 2004. Today, it has a new life thanks to blockchain technology and a new name: “89 atomized seconds”.

How ? In total, the initial work was produced in ten copies that are in the collections of MoMA, the Whitney Museum, Leeum in Korea and private collections, plus two author’s copies. In 2019 one of these copies served as the basis for “89 Atomized Seconds”. The visual field of the video was divided into 2304 blocks of 400 pixels (20×20) called “atoms”. The entire system is based on Ethereum, so each block represents a unique digital object offered for sale at $120, so potentially 2304 buyers.

What’s so special about ? The idea that by selling each “atom” on the blockchain one can create a community that will collectively own that work of art. Since each “atom” in the video is a work of art in itself, the owner can, of course, view it separately for an “abstract dive into the image”, but will need to collaborate with other owners to organize a screening of the full version. To show the entire video for 24 hours, one will need to reserve a date and interact with other collectors to borrow their tokens. The work exhibited – or rather, projected – will be different each time, as someone may not agree to lend their “atom”, someone may lose it or forget the password to their digital wallet, and so the work will receive a new interpretation each time. See here one of the possible visualizations of this work.

In this project, the collectors have control over the artwork, but the artist retains the copyright. For Sussman, what is important is the cooperation of the owners according to the artist’s rules, and the fact that the painting may “die” over time, as some pieces will be lost forever. According to Snark.art, the gallery that worked on the digitization of the work, this should also drive up the price of the remaining “atoms.”

Thanks to technology authentically new works are coming to life. Blockchain and NFT are not intended to be limited to just guaranteeing provenance or authorship. Just as the birth of the canvas, paint tubes and cameras created a rupture, NFTs can sign the beginning of a whole new kind of art.