Cooling individual processors and GPUs with liquid has been made possible over time. Today, it even affects data center environments. The senior vice president at Supermicro, Vik MalyalaSo, he compared the best solutions.

This is the most common method. First, the cooled liquid is pumped directly to the CPU. Then the hotter liquid is directed to a second processor (in dual-socket systems) or to a unit that will cool the hotter liquid. With this, the speed of the fans is reduced considerably. This would make it a perfect option for new servers generating more than 1 kW of heat. In addition, Direct to Chip is suitable for servers with two CPUs and several GPUs.

Immersion cooling is mainly effective for cooling modern high performance servers. It allows tofully immerse complete, unmodified systems in a non-conductive liquid. This remains the best choice for environments where systems are expected to operate at very high temperatures.

The rear doors have fans and coolant. These can then be used to cool the hot air leaving the servers. With this method, only no liquid is used for cooling directly to the system. Once the hot air has transferred its heat to the liquid, it must be cooled from the outside via a heat exchanger. This is the choice to make in the case of an upgrade, i.e. installing new, hotter servers in an existing rack. 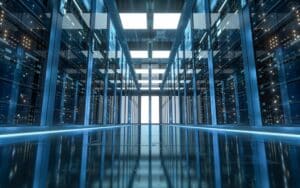 How does liquid cooling reduce OPEX?

Certainly, data center costs vary based on many factors. However, liquid cooling reduces OPEX in two ways. On the one hand, it reduces the power consumption of each server. And on the other hand, it allows to to reduce or even eliminate entirely the use of air conditioners Computer room air conditioners (CRAC).
It is possible to determine the cost savings it generates.

This is either by adding up the total power that the entire cluster (or rack) of servers is expected to use, or by considering the power usage efficiency (PUE). By the way, a liquid-cooled solution will have a much lower PUE than an air-cooled one.
Based on some quick calculations, for a single rack of eight systems with two processors each and eight GPUs per system, the cost savings over three years would be in the range of 32,000 to 36,000 pound-sterling.

Liquid cooling contributes to theincrease of the TDP of the chips. Added to this is the desire for data centers to support artificial intelligence (AI) or simply to be more efficient. That said, the benefits of liquid cooling are not just those. There are many more, and we talk about them.

Hot water is sufficient for liquid cooling to provide adequate cooling to the server. By the way, this detail makes it economical in terms of electricity. In addition, the low maintenance, high reliability and low energy bills significantly reduce the ongoing costs of the system.

The performance of liquid cooling

The latest chips such as Intel, AMD and Nvidia have very high performance. They have then need a very consistent and precise cooling to ensure their proper operation. Liquid cooling is especially designed for this. 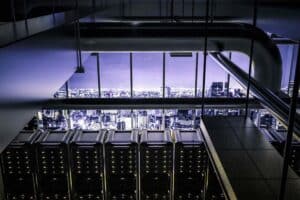 The processor and the DIMM modules The DIMMs with liquid cooling are easily and quickly accessible. They feature blind liquid connectors, similar to blind power connections. These allow an operator to simply slide the server into the chassis without making additional connections.

This is also one of its advantages. Everyone can hear their colleagues and work without the disturbing noise of thousands of server fans.

A possible reuse of heat

Indeed, liquid cooling is with a heat reuse plan. The heated liquid leaving the servers can be directed to the building heating system, significantly increasing the gains. When liquid cooling is combined with an intelligent coolant distribution unit (CDU), it operates autonomously. As a result, data center operators have the choice to have as little or as much control over the cooling system as they want.

We will talk here, about data centers that do not need 100% liquid cooling. In this case, liquid cooling can be combined with air cooling. Their components are small enough not to impede the air flow between the servers.

Major server OEMs, including HPE, Dell EMC, Intel and Gigabyte offer direct liquid-cooled servers with factory warranties. As a result, customers know that their partners have their backs and are no longer exploring a fringe technology. So they feel comfortable.

Finally, the right choice of cooling will help a data center secure the future of its IT system. This method has proven to be effective, at least until now.