From identifying the attack to repairing the damage, here’s a comprehensive guide to surviving during a cyberattack. Can a company survive a cyber attack? The answer is definitely yes, provided of course that a reliable and flexible plan of action is in place in case of a breach.

With the implementation of new technologies in companies and the shift to online work with the pandemic, cyber attacks have increased dramatically in the last two years.

According to Check Point Research, cyber attacks increased by 50% year over year in 2021. This equates to nearly 925 attacks per week per organization worldwide.

Small and medium-sized businesses, which are poorly armed against cyber threats, remain the main targets of cybercriminals. Large companies, although they have more resources to protect themselves, are not spared either.

According to Kaspersky, a large majority of attacks involve humans, employees often lack training and awareness about cybersecurity. Security breaches are also pointed out.

With or without cyber defense protocol, any company, regardless of its size, is susceptible to a cyber attack. Accepting this assertion as true, executives will implement a cybersecurity strategy to protect themselves when the inevitable happens.

For the question is not whether the company will be breached, but when it will suffer a cyberattack and how to ensure survival.

The most common cyberattacks

The world began its digital migration in the early 1990s. Computer security was already a major concern. More than 20 years later, the Covid 19 pandemic and growing socio-political unrest have caused the number of daily cyber attacks to explode.

Even worse, hackers are using more and more sophisticated techniques to reach their target and escape detection. At this rate, experts estimate that the global costs of cybercrime will reach $10.5 trillion by 2025.

In addition to security flaws that are widely exploitable by hackers, poor cyber hygiene also accounts for the rise in cyberattacks. This includes the use of weak passwords or unprotected Wi-Fi networks, the absence of VPNs or regular firewall updates

The vulnerability of the cloud and mobile devices or poor data management also increase the risk of attacks. In the face of these threats, it is necessary to Implement a robust cyber defense and adequate post-attack procedures To limit the damage. This is the key to survival during a cyber attack.

Techniques for surviving a cyber attack

Once a company or organization is aware of a cyber attack, it must quickly adopt post-attack procedures. Rapid response is still the best way to limit damage.

The company or organization must promptly assess the situation and the scope of the violation. Knowing the identity of the malicious actors is not a priority at this stage. Identify compromised systems Remain one of the critical steps in the targeted enterprise.

The next step is to determine the type of attack implemented before investigating the IP addresses used in the attack. This being the case, warn other network users of the compromise. Knowing the type of attack will first allow you toisolate the rest of the system from the threat.

Panicking and knocking out the network is the one mistake you should never make. It can potentially cause customer anger and damage to the company’s reputation. Add to that the financial losses that the outage could cause.

While ruling out uncompromised systems, you should also quarantine infected computers. It is equally urgent to look for backdoors that hackers could set up to gain access to the system again. If any of the vendors or customers are compromised, all access from those accounts should also be blocked until the security issues are resolved. 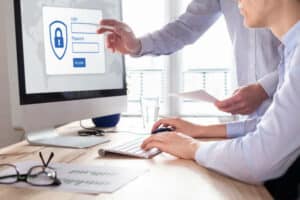 Now is the time to take proactive steps. The IT security team should:

Partner with companies that provide IT security services

In recent years, hackers have increasingly targeted endpoints. Attacks on laptops and desktops are on the rise. Therefore, it is essential to strengthen endpoint security.

It is also necessary update old and obsolete or unsecured devices With multiple levels of protection. This is the best way to secure sensitive corporate data.

Hiring full-time specialists and experts can be very expensive. This type of partnership is a good compromise. By using the services of a cybersecurity company, organizations will have access to end-to-end security solutions.

According to experts, nearly 60 percent of businesses fail after a major cybersecurity attack. By adopting the above techniques, organizations promote survival from a cyberattack.

Subsequently, lessons should be learned from the breach suffered and establish a clear and manageable response plan accordingly to incidents. Speed is essential for responding to a cybersecurity incident. This minimizes the impact on business operations.

Companies with an incident response team and a response plan can save $2 million compared to those that did not have such measures in place.

Security Automation is equally critical to mitigating the cost of a data breach, but not only that. Combining these approaches and best practices will put the enterprise in a strong position against tomorrow’s threats.